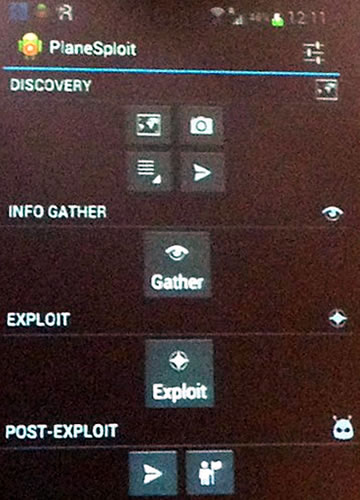 Recently a terrifying prospect, a hack that allows an attacker to take control of plane navigation and cockpit systems has been revealed at a security conference in Europe. An Android application called PlaneSploit that would allow remotely attack and hijack commercial aircraft. This app is developed by Hugo Teso, a researcher at security consultancy N.Runs in Germany who’s also a commercial airline pilot.

He further added,”He explained that by building an exploit framework called Simon and a complimentary Android app that delivers attack messages, he could manipulate a plane’s path as he saw fit.”
With these vulnerabilities in mind, he used virtual planes in a lab to demonstrate his ability to hijack a plane rather than attempting to take over a real flight as that was “too dangerous and unethical.” He used ACARS to gain access to the plane’s onboard computer system and uploaded Flight Management System data.

“I expected them to have security issues but I did not expect them to be so easy to spot. I thought I would have to fight hard to get into them but it was not that difficult,” Teso said.

25 Life Truths You Must Know Before You Turn 25

How to make chocolate bowls

How Your Bank Accounts Can Be Stolen With Zeus Virus?

How to Crack WEP Key With Backtrack 5 [wifi hacking]