Nmap (“Network Mapper“) is a free and open source (license) utility for network exploration or security auditing. Nmap is a perfect scanning tool for hackers out there and boy..they use it extensively.Many systems and network administrators

also find it useful for tasks such as network inventory, managing service upgrade schedules, and monitoring host or service uptime .I will be discussing about how to do simple scanning in Nmap.

Here is how to do that
[1] Start by downloading the version of nmap from here . Net Tools also contain the NMAP scanner.
Windows users, install nmap by extracting the contents of the downloaded file to the C:WINDOWSsystem32 directory.  Linux or Unix geeks can install nmap by extracting the source code to a directory, changing to that directory, and typing ” ./configure “, “make“, and “make install“, all from a command-line terminal.

[2] Now Open a command terminal. On Windows, do this by going to

On Linux, simply use the terminal open from when you installed nmap.
Change directories to where you saved nmap by typing: “cd [wherever you saved nmap]“. You must enter it in a specific format or the command will not work. For instance, to change to My Documents, you would type:

[3] Run a simple ping scan, which will simply say “Hello! Are you connected? ” to each computer you specify. Type

The target can be a domain (www.microsoft.com), an IP address (127.0.0.1), a network (192.168.1.0/24), or a file containing any combination of the above. nmap will discover the IP address of the target if it wasn’t given, and immediately ping the target, returning the results, which it prints to the screen.

The –sS switch tells nmap that we want a SYN Stealth scan. nmap will now get the IP address(es) as before, then ping the target to make sure that it is alive. However, instead of stopping there, nmap will now start asking to make a connection to the computer on each “door” or “port” that it has, 1-65535. When the computer opens the door, nmap tears down the connection and reports that the port is open. Once it is finished, it will report its results to you. 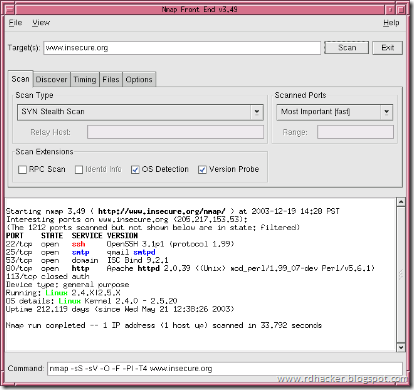 Run another SYN scan, but this time, add the ” –oX target.xml ” switch onto the end. This will output nmap’s results to an XML file, viewable in any web browser. The only problem with this is that you need to hunt for the file if you placed it in your system32 directory.

I hope that was informative.

How to Track wi-fi Hackers?

How to Achieve Success in Examinations

A to Z of Warez Definitions (A Hacker Must Know)

Top 5 Mozilla Firefox Addons a Hacker Must Have