Wireless Networks are those in which the interconnection between devices is established without using wires. The nodes communicate using radio waves. The wireless adapter in a computer translates data in radio signals and transmit it. The wireless router receives the radio signals, decode it and sends the data to internet. Of course this process also works in reverse manner.
A wireless network is usually called as Wifi or WLan. The main advantages of Wireless Networks are that users are not bound to areas to plug into a Wall jack to connect to network and also it reduces the cost of cable used in Wired Networks.

The main disadvantage apart from network performance is lack of security. The wireless networks can be
easily compromised if they are not properly configured. 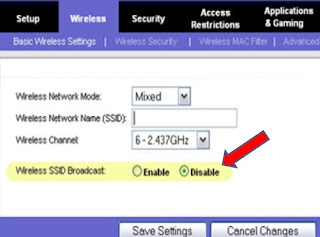 Service Set Identifier (SSID) :It is an alphanumeric string that differentiates the wireless networks .It can be
maximum of 32bit. There can be more than one network in a certain range or on a same channel, SSID
differentiates one from another. Simply it is the name of a network. 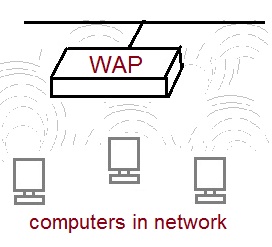 It is the point from where wireless network signals are generated. WAP is a device that receives radio signals from computers in network and send them to router.

It is the MAC address of WAP or wireless router. It is a unique 48 bit key.

These are wireless packets which are broadcasted to maintain the connectivity between WAP and the computers in network. The WAP broadcasts beacons from time to time to check connectivity with computers.

The advantages of WEP

The users/clients connection to the wireless network need to enter the correct WEP key to gain access to network.

It protects the wireless data by encrypting them and allowing decryption by users who have correct WEP key.

The WEP key can be easily cracked by an attacker because size of IV that is 24bit is very short.The vulnerability in WEP is that an IV which is randomly generated is repeated after certain number of packets as it is short (24bit) and less number of combinations are possible.

Due to this insecurity, Wi-Fi Protected Access(WPA) and WPA2 security protocols were released. They provide more security by generating complex and dynamic keys which are hard to crack. The method of creating IVs and encryption keys was improved. WEP,WPA,WPA2 are secure in increasing order.

1. MAC filtering- The MAC address is theoretically a unique 48bit address by which a network device is
recognised. The administrator might let the only the particular clients to connect to network by checking  whether their MAC address is present in the list of registered MAC addresses or not.

The drawback of this security mechanism is that administrator need to keep changing the list of MAC address according to new clients connecting and clients which have not been in use for a long time. This security mechanism can be bypassed by attacker by spoofing his MAC with already a registered one.

Do not simply broadcast the SSID. It lures the attackers or War Drivers to break into the networks. Wireless devices can only connect to WAP if the SSID is known.

Using an encryption scheme like WEP,WPA or WPA2 is must for Wireless  administrators. A WEP doesn’t matter how long it is, can be cracked in minutes. So WPA or WPA2 is recommended.

Completely securing a wireless is hard. But is easy to moniter what is going on in a network. IDS monitors traffic and alerts the administrator when something unusual is happening or traffic matches any predefined pattern of attack. Many open source products like AisSnare, Snort-Wireless,WIDZ etc are available for the same purpose.

8 Reasons To Think Twice Before Taking Antibiotics Ever Again

What is an Intrusion Detection System (IDS)

How to make chocolate bowls

How to Plan For a Successful Future